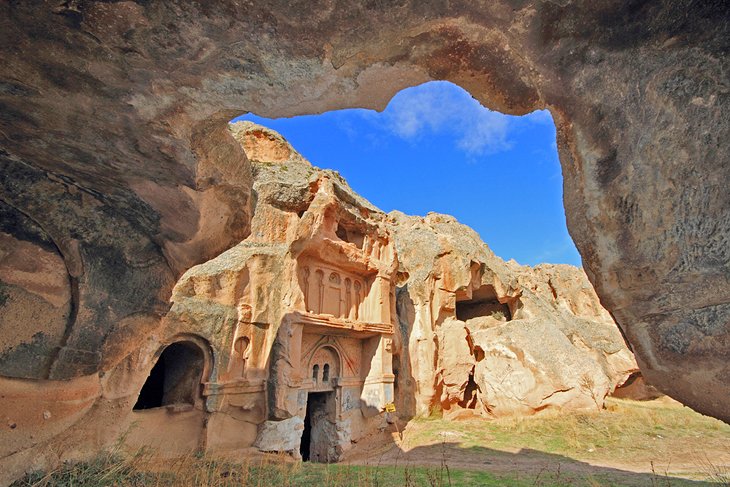 Extraordinary Turkey … the place at the intersection between East and West influences. Just outside of Goreme village is the UNESCO-protected site of Göreme Open-Air Museum, a monastery cluster of rock-cut churches and monk-cells that hold fabulous frescoes. The complex dates from the 10th to 12th centuries, when Cappadocia was an important Byzantine religious center. There are several churches and chapels within the complex, but the most important are the Elmali Kilise (Apple Church), with its Ascension fresco above the door; the Azize Barbara Sapeli (Chapel of St. Barbara), with its red-ochre interior decoration; Yilanli Kilise (Snake Church), with its wall-paintings of St. George and interesting fresco of the hermetic hermaphrodite St. Onuphrius; the stunning and superbly restored frescoes of the Karanlik Kilise (Dark Church); and the cavernous Tokali Kilise (Buckle Church), with its dazzling wall-paintings that cover the entire barrel-vaulted chamber. The museum is one of Turkey’s top highlights, and it’s Cappadocia’s most famous tourist attraction.

Uludeniz is a small village located on the south west coast on the Aegean Sea. It has a secluded sandy bay at the mouth of Deniz, on a blue lagoon. This beach is famous for its shades of turquoise and remains one of the most photographed beaches on the Mediterranean. Deniz is also regarded as one of the best places in the world to paraglide due to its unique panoramic views.

Turkey’s Mediterranean coastline has ruins galore and bags of things to do, but for many people, it’s all about soaking up the sun while enjoying the gorgeous coastal views. Cruising on a yacht is the number one activity for visitors to Bodrum and Fethiye for good reason. The steep forest-clad slopes, hidden coves sporting tiny white sand beaches, and hundreds of scattered islands are the perfect place for exploring by sea. Even diehard landlubbers will be impressed. One of the most famous trips is known as the “Blue Cruise” and travels from Fethiye south down the coast until disembarking near Olympus, home to the famous natural phenomenon of the Chimaera.

A hidden gem which is often overlooked, in our minds, the Basilica Cistern rightly ranks among Turkey’s top tourist attractions. An ancient an underground wonder and one of Istanbul’s best Byzantine sites, this former water storage chamber is composed of imposing columns, vaulted ceilings and even ornate carvings of the ancient gods. Today, visitors can mount its raised platforms to view its eerie waters – this is truly one of the most astonishing ancient places on the planet and has to be seen to be believed.

The early Christians that fled Roman persecution fled to this area and found refuge in the caves that you can see and explore on a best Cappadocia tours. They also made outhouses, stables, storage and workrooms. There is an excellent hiking potential in Cappadocia with rigid valleys and lots of history that are all great to see when on a Cappadocia full day tour that will intrigue all visitors to Cappadocia. See all these amazing sights and learn all about the history on tours of Cappadocia. Read more about Cappadocia hot air balloon ride.

Travelers who love to shop shouldn’t miss out on a visit to the Grand Bazaar, with 5,000 shops making it one of the largest indoor marketplaces in the world. Receiving more than a quarter-million visitors a day, the bazaar features such items as jewelry, carpets that may or may not fly, spices, antiques and hand-painted ceramics. The bazaar dates back to 1461 and today is home to two mosques, four fountains, two hammams or steam baths, and the Cevahir Bedesten, where the rarest and most valuable items have been found traditionally. Here is where shoppers will find old coins, jewelry with precious gems, inlaid weapons and antique furniture.